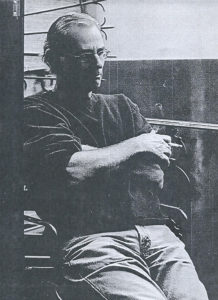 Bill Pilling was born and raised near Cape May, New Jersey in 1948.  In high school he was fortunate to have a young, bright teacher, Jack Weeks, who had recently graduated from the Philadelphia College of Art (University of the Arts).  Jack realized Bill’s talent for color, perspective and creativity and guided him to ultimately  apply to and enroll at PCA in 1966.Bill graduated with a BFA in Illustration in 1970. Upon graduating, Bill found making a living as an illustrator very challenging. Many of his illustration project answers in college were three dimensional. Prospective employers didn’t know what to make his work. He made a bold move to the Poconos in northeast Pennsylvania and transitioned into the graphic arts and printing field. He found work at an architect’s office, making renderings and 3D scale models. He opened his own graphic design studio, Bill Pilling Graphics in 1990 and still enjoys working with his clients to this day.

Bill’s love of making pictures, collecting ephemera and putting odd found objects together  never went away. He built a workshop and studio and filled the walls and shelves with his finds.  Exposing his unique collection of old photos, prints, dolls, feathers, bird nests, skeletons, etc., their relationships “spoke” to each other. Calling out to each other in ways that made these relationships work, or not, when put into a box together.Bill enjoys living and working in Old Forge, Pennsylvania.

Bill’s influences include Cornell, Braque and Picasso, Duchamp and Ernst and Dali.

Space exploration has always fascinated me. Orbiting the earth, landing on the moon, it all made me realize that our planet earth was special, fragile and beautiful. The more I learned about art and the artists who came before me, the more I became immersed in imagining and creating worlds of my own. The diversity of our tiny planet is the background for my creations. I began collecting things that were old, used and unique. Old photos, prints, dolls, feathers, maps, bird nests, skeletons, etc. These objects had histories, objects that were owned and used by others and discarded. At one time, those objects meant something to someone. Now they meant something to me and I wanted them to mean something to others, again.

The process I use is somewhat accidental. By displaying as much of my vast collection that I have room for on shelves and walls, I find something that interests me, as if it’s the beginning of a story that wants to be told. I find other objects that begin to add to the story, then it comes together. I try many different backgrounds, adding color and finally the size and shape of the box the story wants to be in.

Spheres are prominent elements in all of my work and, at times, black for the overall color or background represents space, emptiness and vastness. It helps to show off how special the objects are. Just like planet earth.

A Brief History and Influences

Abstract Expressionism reached its height as a movement in the 1950s. Among its most notable features was an emphasis on the act or process of making a work of art. This emphasis was of major consequence to a number of artists who, in the mid- to late 1950s, began to produce assemblage art. While assemblage differs from painting in that it is basically a three-dimensional rather than a two-dimensional medium, it is also distinct from conventional sculpture as it is formed in an additive process rather than shaped or carved from a monolith. It also diverges from collage, to which it is otherwise directly related, since it moves away from the plane and actively intrudes on the space of the spectator. Further, as initially conceived, collage–and, more specifically, papier collé–was intended to play on issues of illusion and reality. While assemblage can also incorporate painting and drawing, thereby negating what belonged to the plane of painting–the plane of illusion–and equating it with the space of sculpture, its primary characteristic is its tangibility. As with collage, assemblage introduced a wide new range of materials and forms, and, perhaps most important, it brought into play a whole new body of work that could not be strictly codified as belonging to the domain of either painting or sculpture. Assemblage traded on both, expanding on the three-dimensional possibilities of a two-dimensional medium and on the concept of the found or constructed object as it was first recognized by such pioneers of collage, the readymade object, and relief sculpture as Braque and Picasso, Tatlin and Archipenko, Duchamp and Ernst. It became the basis for the innovatory work of a postwar generation of Americans and Europeans.

The word “object” often appears in the titles of Cornell’s three-dimensional works during the 1930s and early 1940s. A nod to the Surrealists’ use of the phrase object trouvé (found object), his word choice also reflects the fact that his inspiration for making art came appropriately from objects themselves. As Cornell collected all sorts of ephemera in the 1920s, the idea of becoming an artist had not occurred to him, yet by 1931 he had shifted effortlessly from simply collecting objects to making them himself. The challenge, he discovered, was finding a medium conducive to his natural talent for arranging unexpected, expressive combinations.

Lack of formal art training actually freed Cornell to experiment with a variety of formats and containers during the 1930s and early 1940s. At first he transformed palm-sized, lidded paperboard boxes – originally designed for pills and jewelry or as scientific specimen cases – with paper cutouts and bits and pieces such as beads, toys, and pins. In search of greater scale and complexity, he turned to small antique wood chests. Many of these chests came with bottles and ready-made chambers, which Cornell put to new use, filling them with colored sands and liquids, coral, shells, costume beading, clippings from maps and books, and wood and rock fragments. The result was a group of boxes that suggest poetic cabinets of curiosities.

During the 1930s Cornell also began designing glass-paned boxes. Initially he relied on prefabricated paperboard boxes in which he mounted figurative cutouts behind glass. After mastering carpentry and woodworking techniques around 1936, he started making his own wood box constructions. Cornell called these early constructions “poetic theaters” and “shadow boxes.” Familiar with Victorian miniature toy theaters, he adapted the format to stage highly theatrical scenarios and tableaus.2